Skip to content
Ahhh.... the smell of a freshly made Roti. Lovely isn't it?
For those of you that don't know, the roti is a soft flat Southeast Asian bread that is traditionally made on a tawa. These electric appliances have significantly decreased the time that it takes to cook roti or chapati breads.
If you don't have time to read through this guide, then just go for the  StarBlue Electric Roti Maker  as this is the one we found the be the most reliable during our testing.
Top 5 Roti Makers
1. StarBlue - 10inch Roti Maker
2. Saachi SA1650 Electric Non-Stick
3. Revel CTM610 Tortilla Flatbread Maker
4. Best Revel CTM-660
5. Brentwood TS-129 Stainless Steel
Due to their flexibility and speed in cooking bread, these appliances are becoming more popular across the world. At our restaurant, we do still make Indian breads by hand, but have used and tested automatic ones in the past.

On this page, we give our opinion on the 5 of the best roti makers we have tried, so you can eliminate your roti making time to Olympic record levels!
Instance 1

read more
The above table highlights our winning products, so just click straight through and you can buy them directly. Otherwise, you can go in-depth to read our 5 favourite ones below.

This device is designed to specifically make bread from Southeast Asia.

It really does make a crispy Indian flatbread and it’s highly recommended for making a nice Phulke or Chapati.

Lightweight yet durable, this is ideal for light users. It won’t do huge amounts of breads, but is suitable for the home kitchen.

This popular flatbread appliance can also make Tortilla, wraps, Chappati, Puri and other types of South-East Asian flatbreads. In our opinion, this appliance is one of the more cost-effective ones in the market.

It comes with non-stick cooking plates and an upscale chrome finish. Lookswise, it’s quite good on the eye and it has a professional cool-touch handle.

However, it has a few downfalls:

Powered by 1000 Watts, this si really good quick baking. To be absolutely honest, this one is actually designed as a tortilla press and we only tested it once with varied results.

On the plus side, it comes with non-stick plates that are easy to clean and has a 10 inch griddle size which is perfect for Indian breads. There is actually a newer model called the Revel Large 10″ Tortilla Maker in Silver but it has been unavailable for a while.

Now, moving to the negatives, there are a few:

This one has a chrome finish body which is easy to clean and the press handler is durable and ergonomically designed to fit one’s hand. Like the others, it has a non-stick surface that helps with keeping it clean.

As for the negatives, there actually aren’t that many:

Sometimes seen as Amazon’s Choice, this larger appliance has a one-year manufacturer’s warranty. The temperature is adjustable so you can make something soft or crispy. That is a really good benefit as quite a few of the other ones listed on this page do not have temperature control.

Again, some negatives too: 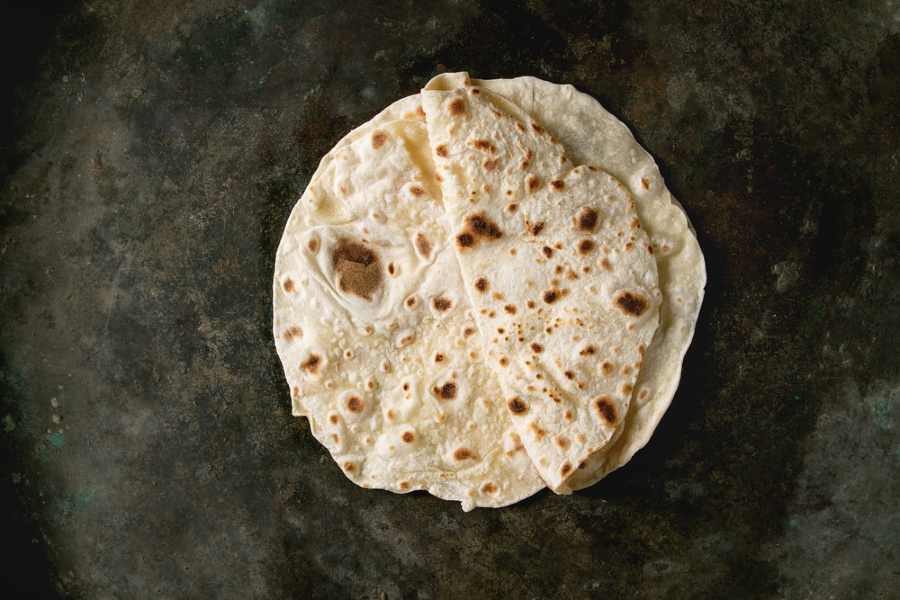 How Everyone Made Indian Breads in the Past

The roti is a round, unleavened flatbread and its origins lie in the Indian subcontinent.
It was originally made from stoneground wholemeal flour. The wholemeal flour, traditionally known as Atta, combines with water to make a dough.
No meal in India is complete without this flatbread. The majority of the meals have some type of flatbread accompanying it. Different variations of this flatbread have become popular worldwide including Chapati (or Chapathi).
A hundred years ago, most of the world was still using ovens in which you had to throw wood into to cook anything. Bread gets rolled and cooked on a tawa. People would then put it directly on a flame until it was ready to eat.
All this was a time-consuming task and would take a good part of the day for the lady of the house to cook it.

And how it’s Made in Modern Times?

Our ability to make miniaturized heating elements has revolutionized the preparation of food in general and South East Asian breads specifically. These advances benefit the family by giving time to the women who traditionally prepared food.

Another benefit that applies to most of these appliances is that they are small. If you are a college student and want to make some flat bread, you can easily store one of these appliances in your dorm room unlike the fully robotic Rotimatic which takes up a large amount of counter space. Prior to these electric appliances the time-consuming process of using a tawa would limit what a working-class family could do with their free time. With an electric device and how quickly it can prepare traditional Southeast Asian breads, the family has time do things like help their children study or relax.

Good, Basic Features you Should be Looking for

Some of the basic features that you should look for in any of your flat bread machines includes a non-stick coating, automatic temperature control, an on/off light indicator, griddle size and other safety features. Non-stick coatings are essential because they prevent the wasting of your effort and time if you have to rip it off the griddle. Automatic temperature control features prevent the bread from being overcooked to the point it can start a fire. The recommended size is 8-10 inches and that it has a non-heat handle lift.

Prerequisites Before Using Them

If your inexperienced at making bread from Sotheast Asia, take a look at the video below. One of the first things you should do is use a towel to it to clean it off. Also make sure that you have a clean surface to put the appliance down on and know where your children are. Most of the devices are light and can be knocked over by a child. Before putting the dough on the device make sure that it has been out of the fridge for at least 10 minutes. For optimum results the appliance should be allowed to reach a temperature of 425 degrees Fahrenheit before using it.

How we Decided on Our Winner

While several of these Tortilla making appliances do a good job cooking Southeast Asian bread, it usually better to have one that was built from the beginning to serve that purpose. The StarBlue is the clear winner because it was designed to primarily make Southeast Asian bread’s including Chapatis and Phulke which are harder to make.

This appliance is durable, has non-stick coating, an automatic temperature control and other safety features. While others had some of these attributes as well, the StarBlue was just as good or had more of these complementary attributes when compared. It also can be used to make Tortilla’s and other types of flatbread like the others.